The above is Schirmer, and is the way I've heard it in every recording throughout my life. I recently opened my Henle edition to find it is missing the C# circled in red. It makes no musical sense to me and has made me question using Henle altogether. Can other Henle users confirm? I must say this is a little jarring.
"Editions" -- that's all.

BTW, I agree with you, totally.
But it's just "editions."

I don't have the Polish National Edition score but I do have the "Wiener" edition, which is similar in nature, including with detailed notes on controversies.
Bottom line: It agrees with you too.

Although: The sureness of its conclusion, and without explanation, makes me laugh a little.

It says that the version you're showing is from the "German" edition.
There are two other sources that are referenced. Only one -- the "French" edition -- shows it the way you and I prefer it.

The third source is a manuscript written by nobody-knows-who. It shows a version similar to what you show; a little different, but similarly without that C# which is the main point.

This note in the Wiener edition ends by saying simply that the French edition "is correct."

Although I pretty much agree with how you put it -- that the shown version makes no sense -- I wouldn't go so far as to say flat out that the French edition version of this is "correct" and that the others are wrong. I don't think there's the capability to say that.
If you are talking about bar 64, I am not sure what version of Henle you have. The recent one has the C sharp and says that the copy by Adolf Gutmann version used for the engraving of the first german edition is mistakenly missing the C sharp upbeat; unlike the french first edition where it is present.
You have both versions available on imsp, of which the Gutmann manuscript.
Speaking of contentious C#, I used to have an Alfred single work edition of Mendelssohn Op. 14 (editor: Maurice Hinson). In the middle of the piece there is a passage sequence of which the Hinson edition has the top notes as C#, C#, C. I thought there was something off, and sure enough after checking the Dover/Breitkopf & Härtel edition the sequence is in fact C, C#, C, which is how it is in the recordings.

Needless to say, I swore off Alfred since then.
Unless one is entering a competition like the Chopin Competition where the judges might worry about which edition one uses, concern about the C# seems quite trivial compared to a million other things when playing this piece. An extreme example of missing the forest for the trees IMO. Even if the Henle edition is wrong in this place, why would anyone consider not using Henle for that reason?
I agree that it wouldn't matter for any significant thing, but that doesn't mean such a concern is "missing the forest for the trees."
It's a worthwhile question, and it is of interest how we regard the passage one way or the other.

Me: Same as Chopinetto.
I do not see how it makes good sense without the C#.
My Henle does not contain the C#, and the editor's notes do not explain its absence. I looked at the Gutmann manuscript, and I see it also does not contain the C#. I also have a Könemann urtext edition which includes the C#, and the editor simply notes it is missing in the Gutmann manuscript. The editor also says that in editing this scherzo:

I'm guessing the C# in question was one of those "deficiencies" in the Guttman manuscript.
Müllemann wrote a few entries on the Henle blog about the new edition of the Chopin Scherzi:

He doesn't cover the C# in question, but he does cover the difficulty of determining Chopin's intentions and which decisions should be considered urtext. The editions for Scherzo No. 3 seem particularly problematic: 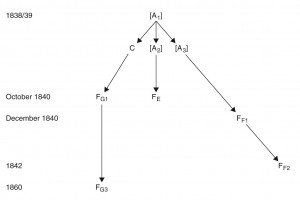 Originally Posted by Müllemann
There are again three first editions (FF, FG FE), though now existing in various issues. There is a copy checked by Chopin, C, and finally three autograph sources, enclosed in square brackets here. As these sources are missing, whether they are really given in the places exactly as shown in the stemma – is speculation. It is, however, necessary to assume such intermediate sources, since otherwise the variants in the first editions can hardly be explained. A truly “hard nut to crack”. The main source in my edition is the French first edition, since in the case of the 3rd Scherzo, the copy C was unfortunately checked only selectively by Chopin – FF proved to be not only the latest, but also the most reliable source despite all engraving errors. The extant and presumably authorised variants from the rest of the sources are, though, numerous, likewise the footnotes in my edition.
And:

Originally Posted by Müllemann
A passage existing in three variants is m. 460. All three chord variants are probably authorised by Chopin – which fits with contemporaries’ reports that he never played his own works the same way twice.
I'm now curious whether the C# is omitted in the Müllemann edition or in the earlier one (Zimmermann?).
Originally Posted by Mark_C
I agree that it wouldn't matter for any significant thing, but that doesn't mean such a concern is "missing the forest for the trees."
It's a worthwhile question, and it is of interest how we regard the passage one way or the other.
As a "former musicologist", I couldn't agree more. Everything about the printed score matters, and this particular anomaly is by no means trivial.
© Piano World Piano & Digital Piano Forums