Piano World Home Page
Apropos my 64 53 thread and since discovering IMSLP has the autograph I've been investigating slurs in K330. Interestingly I've found Mozart is pretty strict with indicating what he wants. Here in the 3rd movement he wants something different in Bar 2 than bar 4 in RH :

In confirmation he does the same in bars 10 and 12. (The first edition makes a blooper here)

Bar 47 of the same movement has the 'double slurs' in the LH: 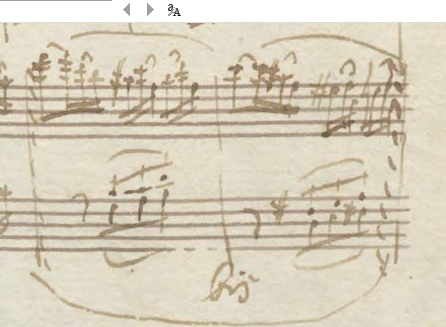 The first edition only has single slurs.

Here, from the slow movement, the first edition also only has single slurs:

These may seem minor points but they can effect the sonority. Mozart always marks the quavers he wants slurred. If they are not marked they're not to be slurred. As my first example (bar 2, last movement) shows both quavers are not to be slurred while both are to be slurred bar 4. Only the first edition of the ones at IMSLP get that right (but even they fail plenty elsewhere).